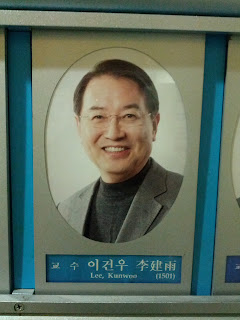 44.326A CAD/CAM Prof. Kunwoo Lee
Prof: Kunwoo Lee: info click here
Credits:3
Lecture type: Lab practice plus theory on CAD/CAM (Computer Aided Design and Manufacturing) systems.
Grading: Final Quiz + Final Project
Lecture notes: gmail public account:
ID: public.mae.2012
Password:seoulnationaluniversity
Class Intro:
This seems to be the only class that I seriously enjoy with an exception to some lab classes where TAs speed up the lecture. Theories regarding Rapid Prototyping to geometric modeling to injection modeling are discussed providing students appropriate knowledge to real life manufacturing techniques. Additionally, software such as CATIA, SolidWorks, Processing and 3DMax are taught to better equip the students for their final projects. Perhaps the most intriguing part of the course work has been to utilize Kinect in the project. As the theme for this semester’s course is QOLT, or rather to put it in layman’s terms, something that improves the lives of differently abled people, the use of Kinect has been seen as an integral part to project design. I have to say, we have some pretty exciting ideas in store.
Project: 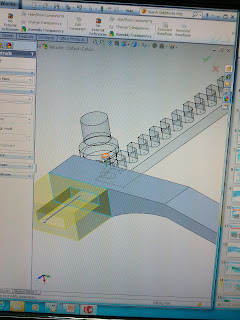 Each team consists of 4 members: 2 from Seoul National University's Mechanical and Aerospace Department while 2 from Ihwa Woman’s University's Computer Science Department. . The project requires students to have both software and hardware base and so forth requires pupils from both majors.
As discussed above, QOLT is the theme but the students can do their project on their own independent terms. However, students who choose to be loyal to the theme will be given a financial support of up to 1000 dollars to fund their project. If it happens to be unique, the students are given the option to apply for patent.
The project can be continued once the semester is over.
Week 4:
The week’s first lecture was given by a CAD designer from Samsung mobile (guest speaker) who has been working for the company for the last 12 years. He touched on topics such as how a mobile phone is designed, how the design is inspired (cars, fashion) and how the design in the future would look like. As technology is taking strides in an unprecedented rate, its hard not to see a flexible smartphone or smartphone’s with multiple LCD in the near future.
It was amazing to meet someone from the inside, who most recently worked on the Galaxy SIII design. The Q and A session went as follows:
Regarding product development:
High end mobile phone such as the Galaxy series takes about 9 months of product development. It takes atleast 6 months to design the smartphone as we have to constantly think how we can make it better than the last one. We take inspiration from nature, music, art, cars and fashion and integrate it to the product. 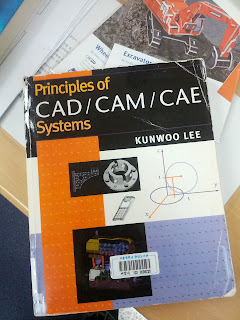 Usually the engineers provide us the design specifics, LCD sizes (the gorilla glass that we used where pre-specified), battery sizes and then we work on the product. We make multiple designs before we can choose the optimum one.
Regarding other products, the design life could be as short as 2 days (all-nighter) or as long as 6 months as I said previously. Companies such as HTC and Nokia take more than a year to design high end products so telecom providers such as AT&T trust Samsung to work on the company specific phone designs.
Apple though, has a totally different concept of working. They take all the time in the world to develop that perfect phone. Time is not the factor, quality is. However, for Samsung, developing something in the shortest possible time is important to remain competitive in a transient market.
Regarding design patents:
Usually design are not patented as its really hard for designers to avoid already patented designs. Apple was the first company to achieve any patent of their square round design and that took them a long time to achieve. Adeptly they divided the same patent into three parts and applied at different time intervals. When all the patents were accepted, they combined to work as one. Very clever indeed.
I see the problem of design patent to be only hurting the American market as the Asian and European market seems to be indifferent to these patents. We will have to see what happens in the future. If each company is to patent certain designs (rectangular, square, round) then it will be very hard for future designers to come up for something. So I seriously hope this will remain here.
If you have any further queries about the design, you can reach him here:
Tae Kim
joshua.kim@samsung.com
Posted by Madeinepali at 4:39 AM No comments:

Soo you are an engineer you say?

Die.Technische.
Before you start out, watch this:

Blog intro:
I have been accused of being overly nonchalant about my major to an extent that people remind me that its time for a change....that I should go listen to DT's Change of Seasons over a billion times and get some inspiration. I do agree that I tend to listen more music than lectures, spend more time in the kitchen than on the study table, work on my personal relations than on engineering mathematics, doing things for genuinely likable people rather than doing the troublesome assignments, reading more about Arsenal than the given lecture notes, drinking more beer than diluted equations and last but not the least, writing emails to professors requesting them to upgrade my grade more than writing on the exams itself.
You could well argue that everyone feels the same way, that NO one actually wants to sit down and work their brains off on some amazingly not-understandable, complexly written text books on even bizarre engineering topics that were discovered a century ago but the reality is that there are such people. There are people who actually enjoy overclocking their brains. Their existence is vital; who would do all those research? Who would bring on the next breakthrough in technology? Who would then bring science fiction into something tangible, something usable? Again, there’s a valid argument that money could play a hand, not to mention the fame and everything that our mundane society demands for. Yet I see an abundance of such genuine characters that have actual interest in stuffs that we frequently tag as “boring”.
Upon a recent “forced” (there was a typhoon outside, what was I supposed to do?) volunteering work in a conference, I got to meet Min as we were the awesome duo responsible for the information desk. Currently doing her PhD in Stanford, she talked about how she actually loves to sit down and study and do research and stuffs. When asked what motivates her to do that, she replied, “I don’t know, I just enjoy it”. No wonder she published her first research paper with some top notch Prof when she was still in high school. Imagine all the work she has already accomplished by now.
The “Technical” Blog, will be something different to what I usually tend to write on my other one. I will try my very best to be more technically oriented, writing about my specific field of study allowing you to have a glance on what kind of courses that I am taking. In the future, I will try to incorporate lecture videos, notes and assignments as part of social responsibility of sharing information that might be of use for students globally. Let’s see how far this goes.
You might be curious, as to why a guy from one of poorest of countries would do aerospace engineering, or rather simply, what the f^&* is wrong with me?
As Prof always say, “that’s a good question”. What they don’t say is “I don’t really know why”
I have- in the past- answered this question several times, most notably in the annoying college application form. I would simply answer that I dream, eat, sleep, eat more, chew, spit, shit aerospace and how I loved to make aeroplane models and throw them out of the window as if it would somehow magically fly and reach my dad who lived somewhere very far. Touching yes, element of truth..mm..maaaybe, crap 90 percent. I got into this school anyways so these stuff does seem to work fine.
The thing is, I do love aeroplanes. I mean who doesn’t. You can’t be sitting on some chair 30000ft above the ground and STILL not be amazed. Have you not done the most ridiculous thing of jumping as high as you can to reach out to a flying aeroplane? (No? oh shit). Have you not enjoyed your ears getting all crazy as the pilot changes altitudes at lightning speed? Or don’t you remember your first puke on the plane..mm..yeah I think I should rather not touch on that. I created a bloody mess on my first Bon Voyage.
Add to the fact that I was a huge fan of Yuri Gagarin after a brief video stint at the Russian Culture Center and the crazy dog who flew into space and came back alive (As far as I can remember I didn’t attempt anything cynical on my dogs. Throwing from the top of the roof with just a helmet on would have been experiment number one but of course, you don’t need to be an Einstein to figure out the result) and everything slowly starts making sense. I did try making my own models of aircrafts; One, a copy of the 1903 glider and the other, an actual arm length moody glider which met its end after somebody humbly put his fat ass on top of it.


So its not that I don’t have a history with what I am studying. Its not that I took a lottery which had “aerospace” and wallahh! I had to take it. I like it. Just that I didn’t realize studying it was a huge pain. Making models is one thing- I could have just gone to carpentry instead-, watching a video about fastest stealth airlines is one thing, but learning the actual mechanism behind is another. Maybe, just mayyyybbee I might be able to put everything in peace when I start working. But we all know how that will end up.
So hanging on to the optimistic rope, I will start out with the courses I have taken this semester. Our university has a GPA system of 4.3 where each student is allowed to take 18 credits per semester. A semester consists of three and half months, so considering how much shit we have to learn each semester, the time factor is pretty intense. One day you have nothing to do and then suddenly everything to do on the other.
Courses:
Engineering Mathematics 2: 3 credits
Jet Propulsion: 3 credits (in Korean btw)
Engineering Economy: also 3 credits (in Korean too. Complete Torture. I have no clue what’s happening here)
Aerospace Structures: 3 credits (continuation of Solid Mechanics)
Engineering Ethics and Leadership: 3 credits
CAD/CAM (Computer Aided Design and Manufacturing) : 3 credits.
Would have loved to write more, but looks like my empty belly requires urgent attention. I will provide details about each course work and how they are being designed and taught next time so that you will have an idea about how the curriculum is developed here in Seoul National.
Time for ham and cheese.
Posted by Madeinepali at 8:44 AM No comments:

Madeinepali
is a huge fan of Ben Stiller's face and would die to play ping pong with Will Ferrell. Currently doing Mechanical and Aerospace Engineering @ Seoul National University and worked as an editor for Quill.